From NEOSYS User Support Wiki
Jump to navigationJump to search

Inorder to block access of other users in a group to not to able to do Financial Reports on certain ledgers, we can configure the Authorisation File for the same:

For configuring the start of a new financial year while setting up a new Company, we need to go to: Menu > Finance > Files > Company File and enter the relevant number in the field - Financial Year Starts.

The vast majority of companies financial year starts in 1st January and has 12 financial periods starting and stopping on the international calendar months.

For example "7" means that the financial year starts on 1st July and consists of 12 financial periods starting and stopping on the international calendar months. Period 12 is 1-30 June in the following year.

You can get a table of the exact dates of each period from Maintenance mode Menu (F10), Finance, Company File, F6 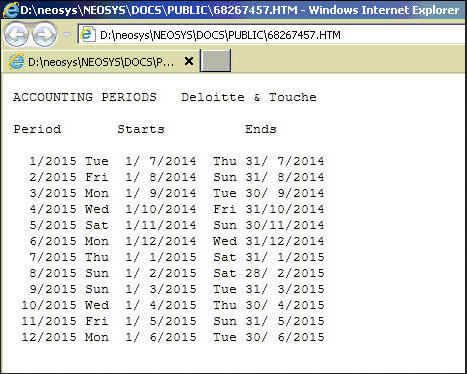 While posting transactions, there is a field 'Period' which actually means Financial Period.

There is nothing to worry about this while posting transactions for January to December.

Likewise 12/2007 would be March, 2008 and respectively for every consecutive year.

If clients ask to make any changes to the top level chart of accounts, then look at how the same item is handled in other clients especially those with skilled accountants, remembering that any single other client may be done badly or not optimally and support staff should not propagate anything less than the best practice.

Once you decide the best and truly correct way to handle this then also get it into Startup Database so that the request to add such an item does not come again in the future.

Creating new ledgers in Chart of Accounts MUST always be done by Support and clients can describe how they want it. This is because any unskilled client with this access can easily create a mess which could be irreversible.

Configuring NEOSYS to convert Foreign Currency to Base Currency

By default, the NEOSYS installation allows only a single currency to operate from the Finance System. Incase you do enter any foreign currency and expect the system to auto-calculate the amount to a base currency, you need to configure the Exchange & Coversion A/c details.

Error while using foreign currency in the finance system 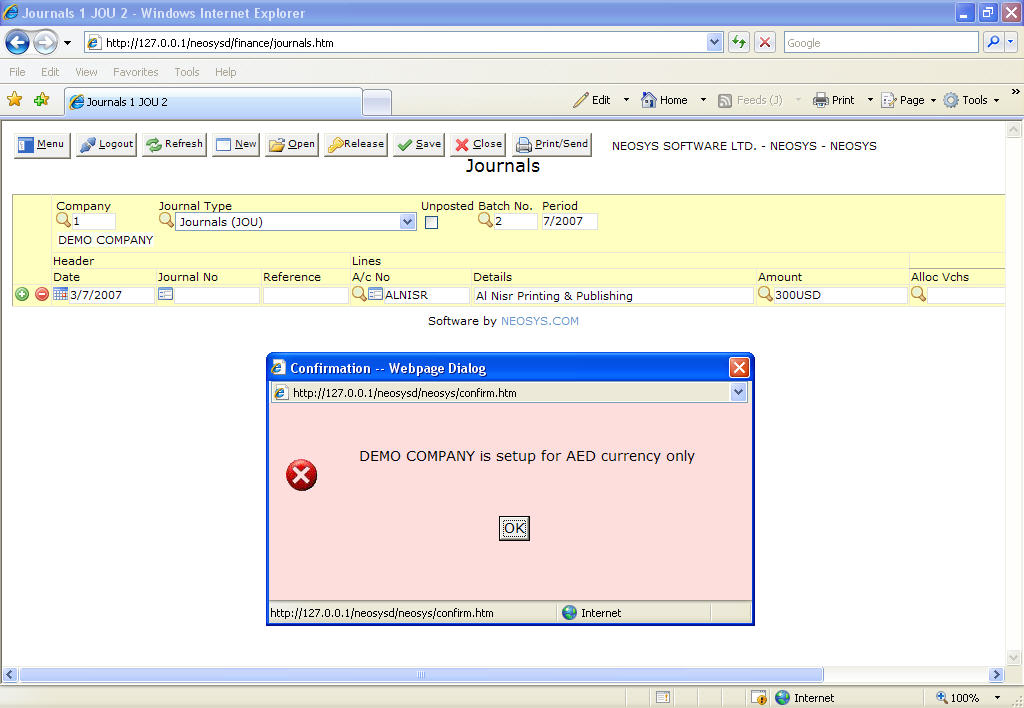 Before configuring the Exchange & Coversion A/c details, you will get a message saying: "COMPANY NAME is setup for AED currency only" (wherein AED would mean any base currency used in the system.

Configuring the use of foreign currency in the finance system

To enable the system to accept foreign currencies and to auto-calculate the amounts to the base currencies, you need to configure the Company File with the Exchange A/c No. and the Conversion A/c No. which is usually 982 and 982B in the chart of accounts:

The NEOSYS Collections File allows you to record and manage activities such as telephone calls and emails etc related to the collection of debts from accounts receivables.

This section explains how to get NEOSYS to email and alert you when collection activity is due. Specifically it lists records from the Collection File where the "next action date" falls between 30 days ago and today. If there is nothing due for action then no email is sent.

For example to create an alert known as COLL01 that runs at 8pm, 12noon and 5pm that runs with the privileges of user STEVE and is emailed to STEVE, JIM and JOAN, issue the following command in maintenance mode/F5.

“Share/Capital” is an account in the liabilities section of the chart of accounts. It represents the nominal value of shares that have been issued to shareholders. It might help to think of the balance of the account as a kind of debt repayable to the shareholders in case of liquidation of the company - in return for their initial provision of “capital” in the form of cash and assets to start the company up. In practice, the breakdown of the balance of the account per shareholder really indicates what percentage of the company the shareholders “own” … and their share of any profits or dividends.

In NEOSYS the Share/Capital account is typically setup as a control a/c in the Chart of Accounts of the General Ledger. Its subsidiary chart of accounts represents the share holders either individually or as blocks of shareholders or in total. Individual shareholders of course may be corporate entities themselves.

In a multi-company setup there are likely to be significant interrelated stock holdings – either existing or in the future. It is probably best to have one common subsidiary chart of accounts under the Share/Capital control A/c for all (or at least most) companies or legal entities in NEOSYS. NEOSYS can then produce consolidated and/or comparative financial statements showing stock holdings across all or selected entities.

NEOSYS Financial statements design splits the design of COLUMNS and design of ROWS into separate issues.

It is quite fiddly and hard to setup all the indented levels and subtotals in the chart in Financial Report Design for a typical P&L Statement. The model database P&L Chart of Accounts should be setup OK but might require modification.

Sections can be very large (i.e. the subtotal is far away from the section heading) and have many levels of *nested* subsections like Russian dolls.

Column's Information Type: should be "Divide 2 previous columns". This is useful to show ratios such as exchange rates and unit costs.

Sometimes the title next to the number will indicate what the brackets mean. For example the title might say "Profit/(Loss)" which gives the reader a clue that that plain amounts (those without brackets) are profit and any figures in brackets indicate losses.

Use NEOSYS Report Design screen, Column: "Normally Dr/Cr" to control per chart section what is expected (Dr/Cr) and therefore what amounts will have brackets on them.

Typical Report Design for a P&L Chart of Account/Report

NEOSYS relies on indentation to determine what sections there are in a chart of accounts and therefore where subtotals show in a report.

Typically for a Profit and Loss chart the whole chart has a single master controlling section titled "Net Profit/(Loss)" and this section is marked as "Normally Credit". The purpose of the single master controlling section is to get a grand total for the whole P&L at the bottom of the report (titled "Net Profit/(Loss)") and which represents income less costs, less overheads.

Within the single master controlling section are typically two subsections.

The REVENUE section commonly has two further subsections INCOME and COSTS. The total of the revenue section (ie the net of INCOME less COSTS) is typically titled something like "Gross Profit/(Loss)"

The OVERHEADS section usually has further subsections to group the various categories of expenses.

Since the master controlling section is set to NORMALLY CREDIT then you will want to set the COSTS and OVERHEADS sections to NORMALLY DEBIT otherwise you will see brackets on all the cost and overhead accounts since they are normally debits.

It is unnecessary and wrong to set individually each subsection of the COSTS and OVERHEADS sections to NORMALLY DEBIT since setting the COST and OVERHEAD controlling sections will automatically set all their subsections to NORMALLY DEBIT. Indeed it would be confusing for future maintainers of the system, so do the proper thing and don't take short cut bodges that solve your problem today but make double work in future to work out what bodges have been made.

Additional sections may be imposed between the above subsections where the structure of the business reporting is more complex. For example there may be sections "Net Profit/(Loss) Before Taxes" and "Taxes" imposed directly under the "Net Profit/(Loss)" section.