From NEOSYS User Support Wiki
Jump to navigationJump to search

1 How to hide the Job Type while invoicing the client?

If a client does not want job type to appear in invoice, then enter job type in the respective Estimate/Purchase Order, on each amount line and not on the Job File.

2 How to add or amend client order number when reprinting Job Invoices?

Go to Menu > Jobs > Invoices > Old Invoices/Proformas. Enter the invoice number in Invoice No. field and client order number in the Client Order No. field. Then click Reprint. 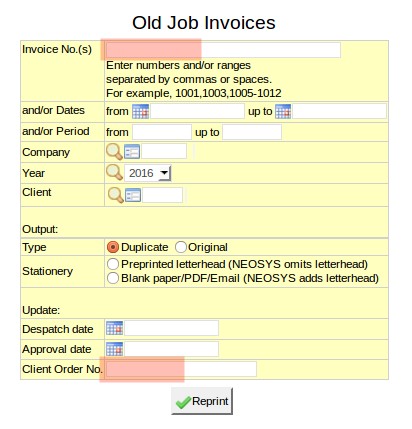 3 Why does NEOSYS reverse PO/repost PI on the cost a/c even when the PO/PI amounts agree?

This is a common question but NEOSYS practice has prevailed for some very good reasons.

Dislike of the apparently unnecessary reversal and re-entry is generally based on:

One can also apply the principle of not varying policy without good reason. In this case, making completely different accounting entries just because a PI varied by one current unit from its PO could be viewed as illogical.

4 How to issue an estimate without creating a Job?

Estimates cannot be issued before a job is opened in NEOSYS.

Issuing an estimate actually should first involve opening a job because this way executive can track how many jobs were opened and if they were materialised.

If the issued estimate has not been approved by the client, then you can easily mark the estimate as cancelled and mark the job as closed.

To close a job, see How to Close a Job

This way NEOSYS will contain an absolute track record of all transactions performed.

5 How to cancel an Issued/ Approved/ Drafted/ Delivered Estimate?

In NEOSYS estimates can be kept as draft, Issued, approved, delivered , cancelled and Invoiced.

There are two ways to close a job as under:

7 How to print an Estimate without the Total?

To print an Estimate without including the total, untick the checkbox as shown in the screenshot below: 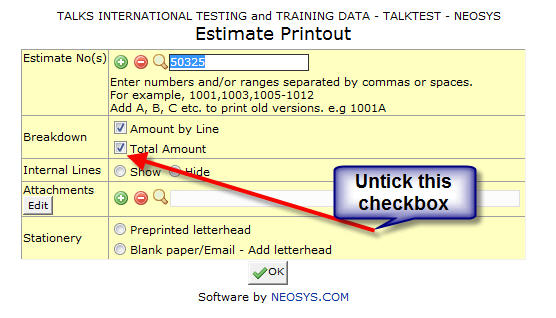 8 How to Issue PO's for Overheads and Expenses?

9 Can my purchase order and estimate numbers be the same as the job number?

Keeping the same number is not as useful as you might think because in a computerized system like NEOSYS the job number is always clearly visible on all orders and estimates and reports. It is not possible to have exactly the same number as the job number since one job may easily have more than one purchase order … and large jobs may even have more than one estimate.

However, since you can create orders and estimate with whatever number you like in NEOSYS. You do not have to take the automatic default sequential number from NEOSYS. In this way you can create them with the job number.

In the case of more than one purchase order per job you can put JOBNO/2 eg 99999/2 99999/3 3 etc. However, using versions instead of pure numbers is not considered good practice because of the impossibility of auditors to check that they have all documents and are missing none - since anybody can add a version to an old document.

Remember that whatever you put as the order or estimate number, NEOSYS will always add B, C, D etc onto the end of the number to indicate the different versions of the same document if you amend it. This does not suffer from the audit issues mentioned above because there is only one document finally.

10 Why is the total cost of a job not being reflected in the list of Job Invoices report?

A possible reason why the total job cost is not being reflected in the list of job invoices is that the PO is not tied to any job invoice.

If the PO is tied to the invoice then it should be included in the invoice cost column DESPITE being in a different month.

However, you can still get the total cost using the "cost adjustments" option while printing the list of job invoices as follows: 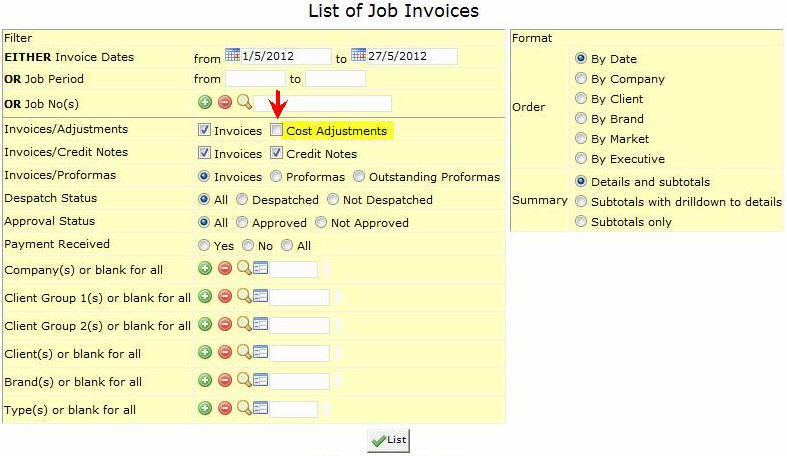 11 How to enter Estimated Job Completion Date in NEOSYS so that I get a forecast of expected revenue at a future date?

NEOSYS does not have a field for entering estimated Job completion date. However, you can keep amending the Period field, based on when the Job is expected to complete. At any given point, you can generate a List of Jobs report based on period, to get an idea of how much revenue can be expected at that particular period.

12 Why does invoicing an estimate by default close the job?

NEOSYS by default closes jobs while invoicing the estimate so that huge number of jobs are not left open in the database, which is highly possible when you keep on invoicing and move on to the next job. Also majority of jobs have only one invoice and estimate and it is safer to close jobs on invoicing to stop any further work on them. Therefore it is better that invoicing by default closes the job.

In some cases users might want to keep the Job open even after invoicing, in that case just untick "Close Job" check box shown in the screenshot below while invoicing. Even if you miss it out, you just need to reopen the job in two clicks i.e Reopen & Save. Unticking "Close Job" check box at the time of invoicing is much easier than manually looking for open Jobs to close them. The latter demands much more labour and attention. Also, many clients have faced the issue of having a huge bulk of open jobs which were never closed even though work was completed for each. 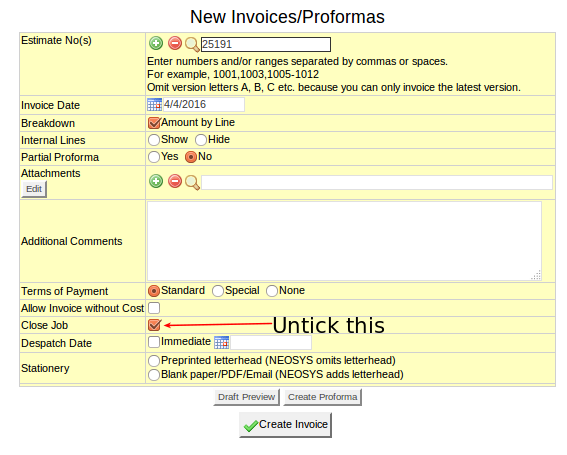 13 Why do our invoice numbers to the client show on our production orders to the supplier?

At the time the production orders are issued initially to the supplier, the client will not have been invoiced so our invoice numbers will NOT show on the POs.

However, once we have invoiced the client, and if the PO is reprinted again, then our invoice number is shown on the PO to assist with internal records and reconciliation generally. If the supplier gets such a later copy of our PO with our invoice number on it, it does not cause a problem even though it is of no interest them.

If a PO is linked to a specific estimate then the invoice number of that estimate will be shown if and when it is invoiced.

If a PO is not linked to an estimate then any and all of our invoice numbers related to the job are shown.